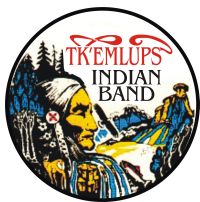 Our goal is to make ourselves more accessible to the public and certainly to our membership. Throughout your visit you will have access to information in various departments and corporations as well as gain a better understanding of the complexity of our organization.

The Tk‘emlúpsemc, ‘the people of the confluence’, now known as the Tk’emlúps te Secwe̓pemc are members of the Interior-Salish Secwepemc (Shuswap) speaking peoples of British Columbia. The Shuswap or Secwepemc.

people occupy a vast territory of the interior of British Columbia. This traditional territory stretches from the Columbia River valley along the Rocky Mountains, west to the Fraser River, and south to the Arrow Lakes. Most Secwepemc people live in the river valleys.
Read More